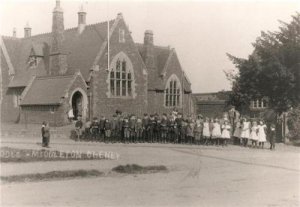 In the 19th Century it was the custom for labouring families in country districts to send their children to work at an early age. In 1868 a visitor to the county noted that,

"All the boys in the agricultural villages... begin to work about the age of eight, a few as young as seven."

At a time when wage rates for adult male workers in Northamptonshire ranged from eleven or twelve shillings a week, the four or six pennies a day that a child could earn was a valuable addition to the family budget.

In the eyes of a vast number of parents the schools had little or no value as an educational establishment. A school inspector remarked that,

"When their children are young they send them to school to get them taken care of and kept out of the way; when they become useful at home they are, as a matter or course, withdrawn from instruction without any misgiving." 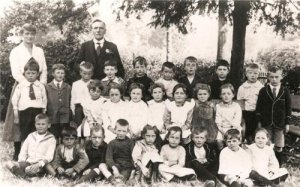 The Middleton Cheney school log book has the following entries –

24th September 1867 – Several; children away from school in consequence of what is called a "Run." (A field cleared of corn in which gleaning or gathering grain is allowed)

9th February 1872 – Three boys absent who were being prosecuted on Thursday for being away for three months working in fields.

As recently as 1905 there was a protest against enlargement of our Primary School which was to cost £500. It was felt to be too great a burden to the rate payers in the village and the Parish Councillors voted to send a letter of protest to Northamptonshire County Council with the comment –

"We should also petition against school leaving age. It is a shame for children to be kept at school until they are 14, when at the age of 12 or 13 years they could be so very useful to their parents."

Conditions in the school itself were less than perfect. Her Majesty's Inspectors visited Middleton Cheney in 1907 and reported –

The Infants are taught under adverse conditions. The room is overcrowded and one end is separated off by an old curtain, which accumulates dust and obscures light. The room is dark in the middle. The old stove should be removed (which had no guard and filled the room with smoke) and the upper part of the windows be made to open... The premises of both departments are badly arranged and overcrowded.

Girls were encouraged to earn a little money before they were old enough to go out into service. Young girls in Middleton were no exception and were often taught lace making from an early age. In fact the village was notable for the fine quality of the fabric they produced. The youngsters normally began to learn their trade at about the age of five or six. Most children went to a lace "school" in the village where they were kept at work for many hours each day. They had little freedom to move and in 1814 a doctor commented on the high incidence of tuberculosis, digestive disorders and bad circulation, which led to swollen ankles and chilblains. These later disorders occurred as a result of the practise of warming feet and legs by placing a small earthernware pot of heated charcoal beneath their clothes. Eye-strain was a further hazard, especially when these young children struggled to make their lace in the evenings by the light of a shared candle. 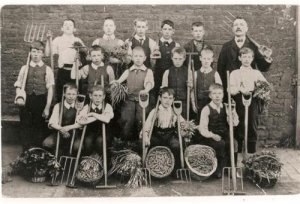 By the beginning of the twentieth century gardening had become an integral part of the school curriculum at many country schools and Middleton Primary was no exception. Gardening was taken seriously and was regarded as appropriate training for those who, it was expected, were to spend their lives working on the land. Each Plot (allotment) had three boys working on it, designated as Captain, Lieutenant and Reserve. The School log books record-

A second generation of compulsory educated children were at school by the 1890s and many parents could recall their own school-days and the benefits of receiving an education. The drudgery of child labour had almost disappeared and it should be remembered that children have an unfailing capacity to look on the bright side and although they may have been employed in the fields as a bird-scarer all day they could look forward to playing in the village later. Country children had the advantage of living in an area surrounded by green fields and hedgerows, where they could pick berries or go bird nesting in the appropriate seasons. In addition the school log books show that holidays were given to allow them to take part in local events –

4th July 1887 – All children to the village green to be presented with a Jubilee Medal. Later to Golby's Field (now the Horton Estate) for sports and games.

24th June 1898 – Prince of Wales passing through Banbury. Children given afternoon off.

These pleasures were simple and inexpensive. As such all country children could enjoy them and they helped to compensate for the harsher aspects of their lives.