THE PLAYING FIELD AND THE SOCIAL CLUB

"This is a great day in the history of Middleton Cheney" ran the headline in the BANBURY GUARDIAN in August 1950. These were the opening words of Mr Manningham-Buller K.C. M.P. as he officially opened the village Playing Field on Saturday 19thAugust. Villagers had all pulled together for five years to raise the funds by means of annual fetes, Christmas fayres, whist drives and dances. The playing field comprised a cricket square, two hard tennis courts and space for a children's playground.

"Mr Christie, the Chairman (and well-known as a staunch supporter of the Labour Party) declared, - Give us all you possibly can. If you don't give your money to us the Government will take it for re-armament and paying for battlefields instead of playing fields."

Mr Manningham-Buller paid tribute to the people of Middleton Cheney for their continuous support for the scheme, in addition to the grants they had received from the Ministry and hoped that politics would be left at the gate. However, he added, "I cannot help thinking that a Tory (cricket) team would show up well and take on most comers!"

Mrs Kekewich, a village resident gave a tree for the field in memory of her nephew who had died whilst in the service of his country; other supporters were encouraged to follow her example.

Following the opening ceremony a drum and pipe band gave a marching display, this was followed by a Tug-of-War competition and a Baseball demonstration. The occasion was noted to be a very successful day with £100 being raised for the Playing Field Fund."

(above extract from the Banbury Guardian August 1950)

A few months before the end of the Second World War a group of like-minded people got together and their conversation turned to the children of the village and the idea of the Playing Field was born.

A committee was formed and a suitable site was found. On the 4th June 1945 a local farmer, Mr John Horace Mold, was approached and he eventually agreed to sell his field located between The Avenue and the Astrop Road. Negotiations for this purchase had continued over a period of years with various disputes along the way. In 1948 the possibility of Middleton's playing field was even jeopardised by the humble potato when Mr Mold prepared to plant up the field with this staple food crop and the War Agricultural Committee was involved in the on-going 'discussions'. Eventually, however all problems were resolved and the tenacity of the Playing Field Committee, with the support of so many volunteers in the village, paid off. John Horace Mold had received a very limited education in the 1880s and could neither read nor write with confidence, therefore negotiations on his behalf were carried out by Mr Ken Charles. In order to keep the cost of the field down a strip along the edge was sold off to a local building firm (J.P. Charles) for development. The final price of the field was £800 for 8 ¼ acres. The sale was completed in January and the deeds signed on 26th October 1948.

A special mention must be given to Miss Daisy Aris (later Mrs. Clarence Wiggins) who lived in The Avenue. The numerous letters she sent out as secretary of the Middleton Cheney Memorial Hall and Playing Field Committee contributed enormously to the success of the project.

A small grant was obtained from the National Playing Fields Association, but this left a large amount for the village to find. The people poured money into the fund, even schoolgirls held "bring and buy" sales in their own homes. Every household in the village was asked to give six (old) pence a week in order to raise enough money to pay for the field. Eventually the Field was paid for and the Parish Council appointed Trustees (1952).

The grass was sown on 28th September 1949 and the fencing put up during October '49.

The tennis courts were laid by a British firm called En Tout Cas (its name was taken from a French idiom meaning "all weather") They had devised a new surface material, which incorporated a blended mixture of crushed brick that allowed courts to dry more quickly after rain.

The Cricket Club have progressed a long way since the earliest record of cricket being played in the village in 1860. After the war their games had taken place on Mr Pollard's Dairy Ground (just off Waters Lane, near the bottom end of Chenderit School Playing Field). A novel system for scoring was introduced – if a ball was hit under the boundary fence, the batsman scored 2, over the fence the score was 4 and over the Sweet Chestnut tree resulted in a 6! Prior to this the team had used Mr Blacklock's private ground (at Overthorpe Hall) for matches although some games were played on the field in front of Thenford House when it was owned by the Severne Family. Mr Law's Home Ground was used for practise (now Home Close). At one time they were also renowned for their choral activities after a match – in fact one publican having been asked the name of the professional group he had hired the previous Saturday, replied, "Not pros – only those *.$ %^:~# ! cricketers from Middleton!"

Football has been played in the village for countless years but it proved difficult for the younger lads to gain a place in the men's team. As a result they formed their own team in about 1918, known as the Flashlights. The present day Club was officially formed a few years after the end of the Great War and met with great success in the 1930s. But the eight year period after World War II was their most successful when they reached nineteen local cup finals, winning on twelve occasions. In those days the local newspapers regularly reported that over seven hundred spectators attended these events. Changing for football still had to be done at the Red Lion public house in the High Street and this continued until the 1960s when a hut was bought from a builder and erected on The Avenue side of the field.

The following extract from the Banbury Guardian gives details of the Sports Pavilion which was to follow – the pavilion was dedicated to the memory of the fallen of two world wars by the Rector of Middleton Cheney, the Reverend Glyn Jones and the Methodist Minister the Reverend David Devlin. It was designed by Mr Robert Gill and built by a Mr Reg Dearing. When the foundation stone was laid by Mr Clifford Acrid on the 5th July 1967, a 'time capsule', was included containing a signed list of everyone who had contributed towards the fund-raising efforts. Also several coins were placed beneath it by people representing different sections of the village (Elizabeth Matthews represented the Youth of Middleton Cheney).

VILLAGE BUILDS ITS OWN PAVILION (April 1968)

Every organisation in the village has contributed to the building, which contains three sets of changing rooms, showers, a central hall and toilets.

The pavilion also stands as a memorial to the service men and women who lost their lives in the two World Wars. It was felt that a tribute of this kind would be more fitting than the usual village monument, and the organisation responsible for the new amenities has been called the Middleton Cheney Memorial Hall and Playing Fields Association.

A playing fields fund was started just after the last war and the six-acre ground was bought in the early 1950s. Just over five years ago the association started the sports pavilion project.

The association has received a 50% grant from the Ministry Of Education and Science, and a £500 grant from Northants County Council – but the remainder of the money has been raised by the village. Said secretary, Mrs Irene. S. Forrest (nee Acrid), "This is a dream we have had and now we can see it in bricks and mortar. We are all very thrilled." To raise the money the association held, "fetes in torrential rain and has had support from every organisation in the village."

Mrs Forrest thanked the committee for the work it had put in and paid tribute to the pavilion's designer, Mr Robert Gill. Earlier she spoke of the long-term aims of the association – with the possibility of a small swimming pool and a bowls area.

The only disappointment of the day for the committee was the non-appearance of Mr Roger Prideaux, captain of Northants County Cricket Club, who was due to perform the opening ceremony. After a hold-up of over half-an-hour, Brackley RDC chairman, Mr L.S. Prosser stepped into the breach."

Due to the licensing laws in the 60s, there was nowhere for the cricket or football players to go after a match and this became particularly difficult when pubs did not open until after 7 o'clock on Saturdays. In 1969 the Playing Field Committee, (led by Chairman Mr Gerald Twynham and Mr Gerald Palmer, Secretary), investigated the possibility of forming a club in the pavilion. A license was obtained, alterations were made to the pavilion in order to install a bar and thanks to an interest-free loan from Mr Clark of Hook Norton Brewery the club opened in August 1970. It became an immediate success and it was soon obvious that bigger premises were required so that everyone could enjoy the entertainment on Saturday and Sunday nights.

This was eventually achieved when a larger building was added to the existing pavilion, thanks to the continuing enthusiasm of the committee lead by Mr Twyham, Mr Palmer and the treasurer, Mr Gibbard. This extension was opened by the Chairman of the Parish Council, Mr 'Jock' Christie in 1973. A further extension to accommodate the increasing demands on this building was added and opened in 1988.

The very first fund-raising fete was held in 1945 and continues today, over sixty years later. Please support YOUR local playing field and the social club; we need your help as much as ever to make certain that the future of these important facilities is assured. 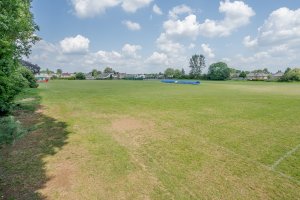